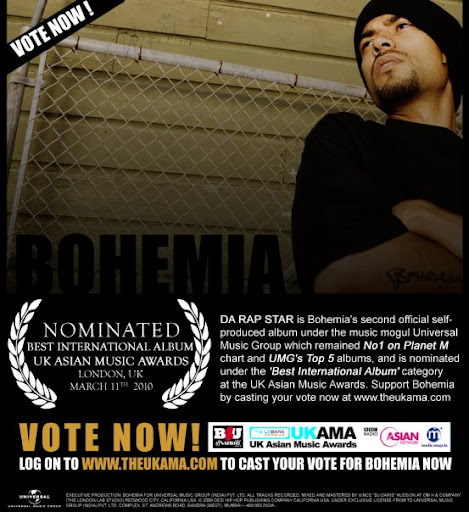 Da Rap Star is Bohemia's second official self-produced album under the music mogul Universal Music Group which remained No1 on Planet M chart and UMG's Top 5 albums, and is nominated under the 'Best International Album' category at the UK Asian Music Awards. Support Bohemia by casting your vote now at

http://www.theukama.com/pollvote
The UK Asian Music Awards (UKAMA) 2010 is the most prestigious Asian music awards ceremony in the UK presented by B4U Music and BBC Asian Network as the official radio partner. The UKAMAs will be held at the legendary Royal Festival Hall on London’s Southbank. for more info and to cast your vote, log on to http://www.theukama.com and register for free.
Posted by Aman S. Aneja at 1:36 PM